My littlest boy, or The Little One, as he has been dubbed in our household, is seven months old now. We have been exclusively breastfeeding for around six weeks now, which is mind-boggling. It has become normal. Normal. Can you believe it?

I am hitting a whole bunch of new firsts — Some great, some annoying, some not great at all. But even the not great ones actually make me really happy deep deep inside, as they are potential problems that any successfully breastfeeding mother deals with. They are not weird, rare, unexplainable issues, and this I love.

– His night nappy leaked. As in, it leaked from too much wee. And we had him in a size 4 nappy, which is technically from 7-18kg (how on earth you’d fit an 18kg child in one, though, is beyond me) and he is only 7.5kg, so that was a lot of wee. And it was from my milk alone. Rock on.

– I fed him in a public toilet. Not out of embarrassment or harassment, but because I chose to. It is quiet and boring and reasonably dark in there, and since he is a very distracted feeder lately, I chose to do this to get a decent feed into him during a busy day. I sussed it out first, and it was impeccably clean (though it isn’t as if I am dunking his face in the bowl), and yes, it worked. 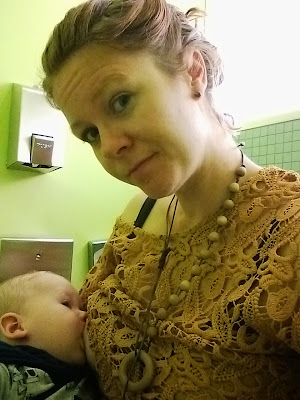 – He bit me. We were having a bath together and he kind of pushed his way up to my breast and so I got him to latch on, thinking he was hungry, but nope – he just wanted to play. WOWSERS. He drew blood! New little teeth are thin, sharp little buggers! And now he has six already, four on the top and two down the bottom. Yikes. All the advice I’ve heard about this issue is to try your best to repel that instinct to take them off and yelp, and instead to try to remain calm (ha, easy to say when it isn’t your nipple being carved!) and to actually pull them abruptly into the breast. I didn’t do either of those things. I yelped and whipped him off. Oops. He is yet to do it again, though, and I have certainly learnt to wait for him to be more definite in showing cues that he wants to breastfeed from now on!

– Feeding him to sleep is one of my favourite things about being a breastfeeding mama, but now that teeth are involved, sneaking my body away from a sleeping baby often involves having to drag my nipple past a set of grating chompers. Another new, and totally normal, thing to navigate!

In other news, I’m playing around with my domperidone levels again. I’ve been down at 60mg for a couple of days now, and no dramatic signs of less milk production, so I’m hoping to keep that up! As with everything this time around, I’m not taking notes on any specifics, so I’ll go down another 10 in a few more days, after I feel confident that the 60mg is okay. This whole process scares me, but I would really love to be able to feed my boy for as long as he wants, and I really don’t want to have to do that while medicated for the entire time… It seems a little…. I don’t know. Wrong is too strong. But just unnatural, when the whole aim of everything I am doing is to allow this process to be as natural as possible. So… yes, it seems a little counterintuitive.

And in more other news, my ever-so-glorious first boy is three years old today. As I said to him at bed time, it is completely, totally, absolutely and definitely impossible for me to love any part of him any more than I do. He is an earth-shaker, that’s for sure. 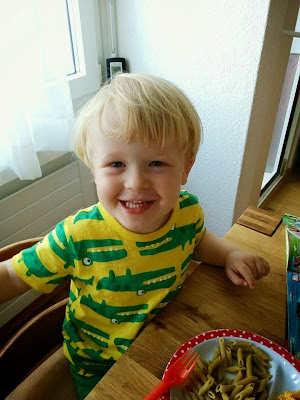