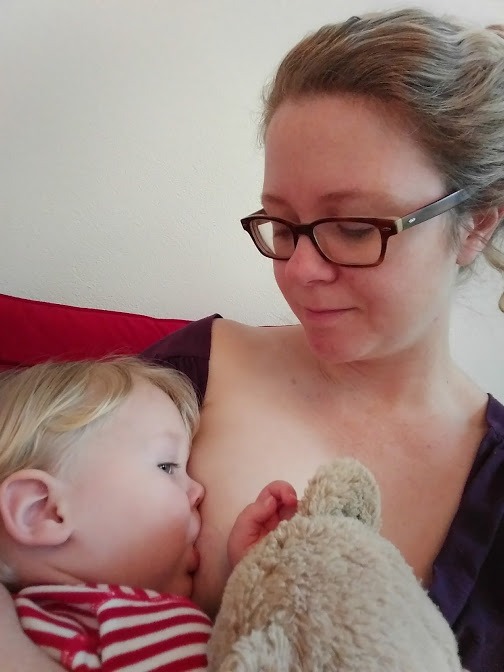 Sure, I had heard about biters. In fact, before I was a mama, I used to think that sprouting teeth was nature’s way of telling you to stop breastfeeding. The greater beings were showing you that your baby is ready to eat steak, and not only milk.

I didn’t realise, you see. I didn’t realise that breastfeeding was about comfort and love and sleep and pain-relief and the-world-is-overwhelming-me-relief. I didn’t realise that the average age of weaning world-wide is 4.5. I didn’t realise that the World Health Organisation recommends that all babies be breastfed until two years of age. I didn’t realise that it would be something that was so fundamentally important to me in my role as a mama. Only when I couldn’t do it did I realise how much I wanted to.
And then last week The Little One started biting. And now I understand. All those mamas with babes that have bitten them… I was way too flippant about it. He managed to get six teeth without biting once, and then he got a cold. It seemed to be the combination of a cold plus teething that triggered it, and suddenly everything upon which I had based our feeding relationship was out the window. ‘When in doubt, whip it out!’ was my adage. And so I whipped it out all over the place – to sleep, to wake, for hunger, for pain, for unknown grizzles. Now, if I attempt to breastfeed him at a time when he is not completely shattered with fatigue or absolutely desperate for my milk, he bites.
The first time he did it, it was first thing in the morning. Usually he wakes very happy and babbles away, and then I feed him a little which gives me time to slowly wake up too. It was a glorious morning ritual. Until he bit me. Hard. Literally, it was as if two shards of glass were being hammered into my nipples. Yes, I screamed, yes I cried, and yes, I bled. And yes, I was furious. It seems ridiculous now, in hundsight, but I was so angry at this little boy. All that I had been through to allow him to breastfeed, and he bit me?! I didn’t even want to look at him. I got my husband to take him away from me while I wiped away my tears, wiped away the blood, and took some deep breaths.
And then I had to try again. Goodness, the fear…
This time I waited. I waited until he was unhappy, until he pulled at my shirt with his mouth open. Since that first time, there have been others. I try hard not to yelp, in case he thinks it is a fun game, or he gets such a fright that he goes on a nursing strike. I have now learnt to close up shop the moment that he starts babbling, in case he wants to play instead of feed. I have now learnt to offer him something to chew on first, to test if he really actually justs wants that, and not myboob at all. I no longer feed him to test if he is tired. I no longer feed him to relieve his teething pain.
I am not feeding him for comfort, and that saddens me. Funny; this has turned me into a somewhat ‘normal’ breastfeeder. I am now feeding him about every four hours, instead of little bits here and there all the day through.
I know it won’t last forever. I think the thick of it is already over, as he hasn’t bitten me today at all, and his sniffles are beginning to subside.
***
Things I know now:
Tags: first year