Milk in a cup

This might be a little odd, but I’m preparing myself for some catharsis today.

For the first time in this 10month breastfeeding journey, I expressed some milk. There is still no way that I am getting within five kilometres of any pump, but I did a bit of hand expression. It was totally on a whim, after my baby pulled off early, and I figured that I would just see what happened.

With my first baby, I pumped and pumped and pumped and pumped and friggin pumpetypumped. Once, just once in the three months that I did this, did I ever see a little ‘jet’ of milk. It was always just tiny trickles that I would be collecting, perhaps amounting to anywhere between two and seven millilitres after forty minutes. To put this into perspective, when I went to receive my donor breastmilk, the mother fed her baby in front of me using one breast, and pumped on the other. Within four minutes, she literally had 160ml. 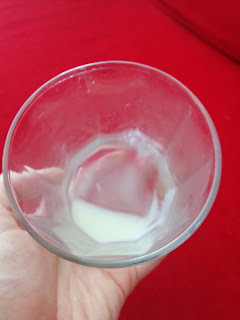 I got myself a clean glass, made sure my hands were clean, and practiced expressing. I figure that it was a good skill to have anyway, seeing as I’m embarking on studies of this nature, so I may as well use myself as my first guinea-pig. I had always been too scared to do this because I might be taking milk away from my baby for when he needs it next (maybe it would be one of those feeds where he was only half done and comes back two minutes later), or I might not get any, and I wanted to avoid overthinking it.

So I was spraying milk all over the shot. WOWSERS! Seriously, if there had been a fly on the wall, he would have been laughing his head off at this woman sitting in a chair surrounded by laundry and toys, watching milk shoot from her breast into a cup with the biggest smile on her face. I only did it for about three minutes, and then my little boy required more attention, but I got some.

Now. What to do with it? My immediate thought was that I can just stir it into his next lot of yoghurt or cereal or something… and then I realised with a start what I really should do…

I am going to give it to my oldest boy. The boy with whom I wished with every wish in me that I could breastfeed. It is really a tiny amount, but I’m going to put it in his bottle this evening and smile as I watch him drink it.

This is going to be good for me. (Or maybe it will be the first night that he agrees that he doesn’t need to have his bottle before bed… wouldn’t that be a laugh?!)