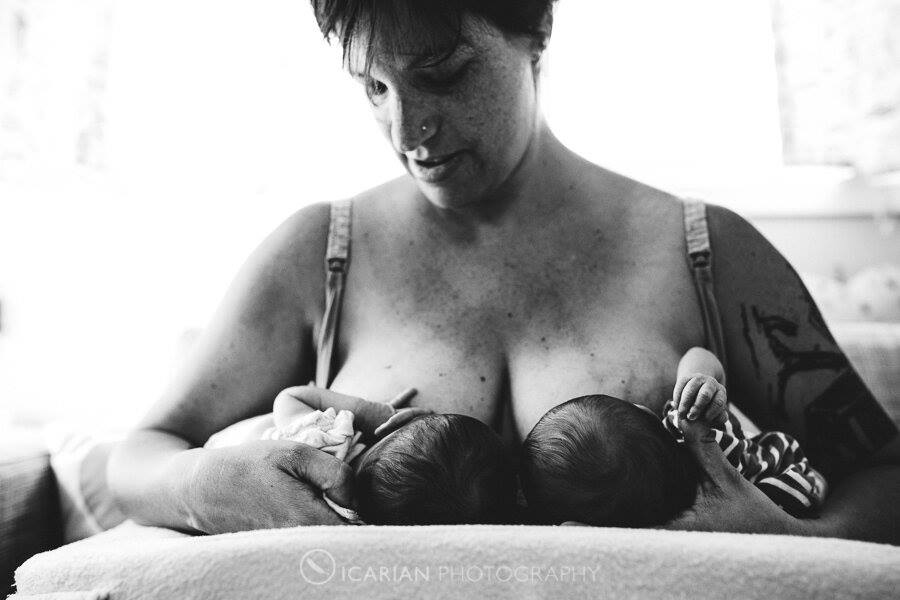 Meet Sharon. Sharon wears an invisible cape every single day that signifies her strength in this world of babies and motherhood. She has been through the ringer. We are incredibly lucky that Sharon is also an ‘oversharer’ (the best people are, right? 😉 and revealed the often gut-wrenching pain of five years of unexplained infertility and resultant invasive fertility treatments on her blog.

She and her husband now have two beautiful girls, Lillian and Matilda. Among all the joy and tumult that new babies bring, they have also had to navigate their way through Matilda’s diagnosis of CysticFibrosis, and the incredibly tragic loss of a very close family member.

Read about Sharon’s breastfeeding journey here, and how she “didn’t realize it would also be kind of a delight!”:

Tell me about your breastfeeding experience

My twin girls were born a day before 37 weeks and were just over 4 pounds each, so we supplemented breast milk with formula from day one to ensure they didn’t lose the ounces that newborn babies often lose. We were in a hospital that really understood and encouraged breastfeeding and they had me feed them formula via a Supplemental Nursing System and had me pumping immediately to get my milk flowing. My girls took to the breast right away, even though they were so tiny, and before we left the hospital I was comfortable tandem feeding them. They never were exclusively breast fed and we went through phases where they got more milk and phases where they got more formula, but I loved our breastfeeding relationship. We breastfed until they were 8 months old, moving slowly from exclusively tandem feeding to exclusively individual feeding by the end (as their size and development changed).

Did you go into motherhood with a firm idea of how you wanted to feed your baby? Where do you think this idea came from?

Ya know what? After years of Infertility I dropped all firm ideas of anything. It’s the truth. Had you asked me five years earlier I would have been firm about breastfeeding, firm about an unmedicated vaginal childbirth, firm about so many things, but I was forced to really learn that things don’t always go as you plan, and I found ways to be content with reality. So, yes, I had a strong desire to breastfeed, and I’m so glad I was able to, but I also was at peace, immediately, with supplemental formula, with nipple shields when needed and all. I was definitely willing to work pretty hard to make sure we had a breastfeeding relationship, but I was also willing to make sure we all felt peace with whatever happened. I live in a community that is very pro-breastfeeding, so I’m sure my desire to breastfeed was a part of that. I would definitely have felt like I was being judged (even if I wasn’t) had I not. At the same time, I’m a reader and a researcher and a follower of a million websites and blogs on relevant topics and I just had no doubt – I knew breastfeeding was for me. In fact, not breastfeeding was one of the things I was working on being at peace with in the case that we had decided to adopt. It was a loss I knew I’d have to grieve.

Ya know what – breastfeeding was more fun than I thought it would be! I think I had heard so much about the work and the pain and the complications that for me going into it I saw the positives as it being good for the babies and good for our relationship. I didn’t realize it would also be kind of a delight! We had some good really goofy moments! Breastfeeding two, especially as they get bigger and older, is a bit like a hilarious game of half-naked Twister! So, yes, it was work and it was painful and it was really good for the babies and our relationship, but it was also fun and funny and delightful.

What is the biggest challenge that you have had to attempt to overcome?

The end of our breastfeeding relationship has definitely been the biggest challenge to overcome, and it’s been more of an emotional challenge. I kept thinking, “HOW DO YOU STOP BREASTFEEDING???” and feeling unable to imagine it because I had so much milk and it hurt if I didn’t get it out and I just couldn’t figure out in practical terms how weaning would happen. I planned to wean at just about a year, when I went back to work. Then Ali, my sister-in-law died suddenly, when my girls were 8 months old, leaving behind my amazing brother and my three beautiful young nieces (the youngest 2-days old at the time). We rushed to Ohio (from California) and were there for just over three weeks (and have been back several times since). During that time, the milk just stopped. I wasn’t eating. I was grieving. I was working so hard to help my brother, parents, nieces etc and my body just said STOP. And at the time that was OK because I was so focused elsewhere. Now I hate that the end of my breastfeeding relationship with my girls is tied into this terrible awful family tragedy – this worst thing that has ever happened in our lives. I wish it could have been a bit later and a bit more on my own terms. I guess, also, though, I love Ali so so much that it is appropriate that my body expressed the pain of her loss in this way. So I try to embrace it as another dimension of how much my family means to me. My little family of four and my bigger broader family.

What are your thoughts on this idea of a ‘mummy-war’ that exists between breastfeeding and bottle-feeding mothers?

Like every mom I’ve actually met, I hate it! It is complicated, though, isn’t it? We all need to believe that our way is the best for our children and part of that is a natural instinct to then judge the way of others, to help us convince ourselves that we are doing everything right. But we never know the reasons that lead to other’s personal choices, and in some case choices are quite limited. Even though it was very important to me that I breastfeed my girls, I have never believed that there was anything wrong with formula feeding as long as an informed choice has been made. It’s all about education and women’s access to information and their right to make their own decisions and receive the support they need for those decisions. So, pardon my French, but fuck the mommy wars!

Sharon, I feel truly honoured that you allowed me to share your story. You know that I think you’re the bee’s knees. I wish you a smooth road ahead, lovely lady, and a real chance to take that cape off once in a while. <3