A Support Network: This is what it looks like.

I started a Facebook breastfeeding support group a few months ago. The reasons I started my group were multiple:

It was because I had so many questions almost every single day, and I desperately wanted a collection of experienced mamas to help me out.

It was because of those moments where I wanted to rejoice, to shout from the rooftops that I had fed my boy supplement free, and I wanted those people who truly understood how amazing this was to know that and to rejoice with me.

It was because I wanted to cry and cry and cry sometimes because of things that the majority of the population deem as ‘not such a big deal’.

It was because I wanted to educate like-minded mamas in all the things I had learnt along the way on this crazy journey of mine — About the Supplemental Nursing System (SNS), about galactagogues and domperidone, about tongue and lip ties, about donor milk, about postnatal depression, about biting, about dealing with the past, about the medical system here in Switzerland, about monkey brain — and I wanted to do it in an informal, positive manner.


I wanted to be able to freely discuss any issue whatsoever regarding feeding our babies, without having to conform to guidelines set by some overarching (however well-meaning) organisation.


I wanted other mamas to have a network of help that I desperately needed when I had my first boy, that may prevent future problems or assist them in reaching their personal goals.

I wanted mamas to know that they aren’t alone, and I wanted to feel less alone. 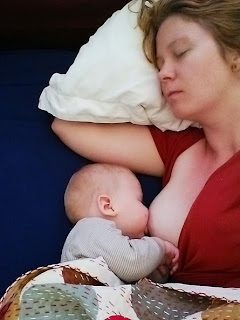 This group now has almost 200 members (edit, it now has 1500 two years later!!!), many of whom actively post and respond. I am so proud of the mamas in this group — there has never been a comment (truly!) that I have felt I needed to moderate due to criticism, judgement or negativity. It is such a wonderfully supportive environment where I feel so supported and so safe, and I hope that all the other members feel the same way.

Yesterday I received this incredible message, and it has warmed my heart so wholly, more than I will ever be able to articulate. It is from a woman who also has been working so hard towards her goal of being an exclusive breastfeeding mama, but who was having to overcome a host of hurdles: Latch issues, Nipple shields, giving formula top-ups from a bottle, a sleepy feeder, a possible lip tie… sounds rough, eh? And sadly not uncommon! So among other things, I told her about the SNS, and a bunch of us helped her along the way.

Here is the message I received from her yesterday:


Hi Johanna! I’ve been meaning to send you a message ‘when I have a spare 10 minutes’ for about the last month…slowly dawning on me that I may never again have a spare 10 minutes…haha! In fact it was in response to an article that you posted a while back…can’t remember what it was about but you commented that you hoped one day to be people’s go-to person for breastfeeding issues – I wanted to say that you already are! I’m not sure that we would have succeeded in weaning off the supplements (which I think we have – hurrah!) without your advice and the general support from the group that you have created. So thank you a million times! And having read on your blog about all your own struggles…it seems that through these you find the strength to give such compassionate and non-judgemental advice. You already are a fabulous lactation consultant, even if you don’t have the bit of paper to say so quite yet! How is it going with the motilium? Hope you are all feeling better xxx


I mean, really. How amazing is that?! Yes, it made me cry. To know that something that I have done has helped a mother to reach her goal, when I know exactly how important that goal can be, really fills me with such joy. This is what it’s all about to me, this is what I am striving for. Yahreepa!